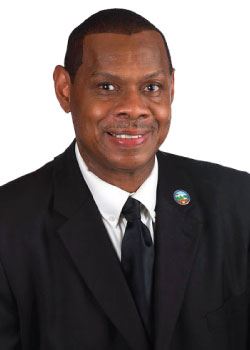 "Education is the passport to the future, for tomorrow belongs to those who prepare for it today." - Malcolm X

Councilman Walter Stewart proudly began his first city council term in Warrensville Heights in January 2016. The Cleveland native attended Cleveland Public Schools and served as a telecommunication specialist in the United States Army until his honorable discharge in 1977.

As a councilmember, Mr. Stewart aims to address and resolve many of the socioeconomic issues city renters and homeowners face, to help enhance their quality of life in Warrensville Heights. Councilman Stewart also focuses on ways to alleviate disability and ageism issues faced by constituents while working closely with the schools to prepare our children for the future, and increase voter education.

While working at General Motors, Councilman Stewart received a Liberal Arts Associate's Degree from Wayne County Community College and a dual Bachelor of Arts degree in Political Science and African Studies from Wayne State University. At Wayne State University, Councilman Stewart served as the president of the Pan African Student Union and was an intricate part of the student body’s pressure to form a Department of Africana Studies, created due to the protest. Civically, Councilman Stewart served as the Program Director of the African American Art Institute and worked closely with the daughter of the late Jackie Wilson at Apollo Live Detroit, writing articles for the Apollo Live Detroit newsletter.

After his retirement in 2008, Councilman Stewart returned to Ohio and made Warrensville Heights home. Councilman Stewart is an active member of the UAW and helps coordinate local voter registration drives, food and clothing giveaways for the homeless, Ward 4 Summer Food Program (in conjunction with the Cleveland Food Bank), and grassroots efforts for national and local candidates, including President Obama's 2012 re-election campaign.